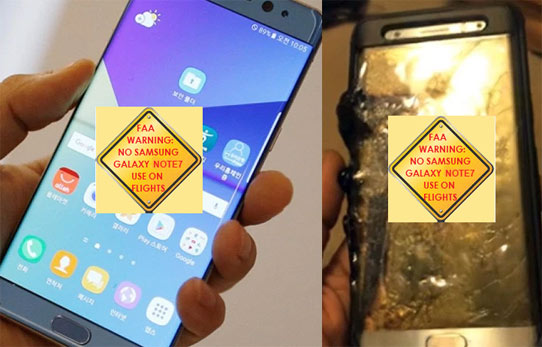 Within the past couple of weeks, there have been about 35 reported cases internationally regarding Samsung’s signature phone, Galaxy Note7, exploding. On September 2nd, 2016, Samsung acknowledged the issue lies within the Note7’s battery cell. As a result of faulty manufacturing in which anode-to-cathode electrodes came into contact with each other, it instigated overheating and explosion of these phones. The problem is segmented to only the Galaxy Note7 series.

Samsung took full responsibiltiy, and issued a recall of the Note7. They have established an Exchange Program for the Note7 to either by provide a new Note7 once it has been approved for release. Or Note7 owners can exchange for a Galaxy S7 or Galaxy S7 Edge. It is highly recommended that owners of the Note7 discontinue its use, and contact your cell phone carrier to get a replacement. As compensation for the inconvenience, Samsung is offering a $25 gift card in-store credit or to be applied to select products of the exchange program.

As a result of these findings by Samsung, the FAA released a statement Thursday September 8, 2016, to advise Note7 owners to NOT operate NOR charge these phones while on a plane. Additionally, DO NOT store it in any checked luggage.

Therefore, if you have not taken advantage of the exchange program yet, and still need the use of your Note7, be aware that it is a flight risk for all passengers on board to use, or charge it on planes, or stow it with checked baggage. For your safety, and the safety of others around you, it is best to partake in the Samsung Galaxy Note7 Exchange Program. Travel safely!